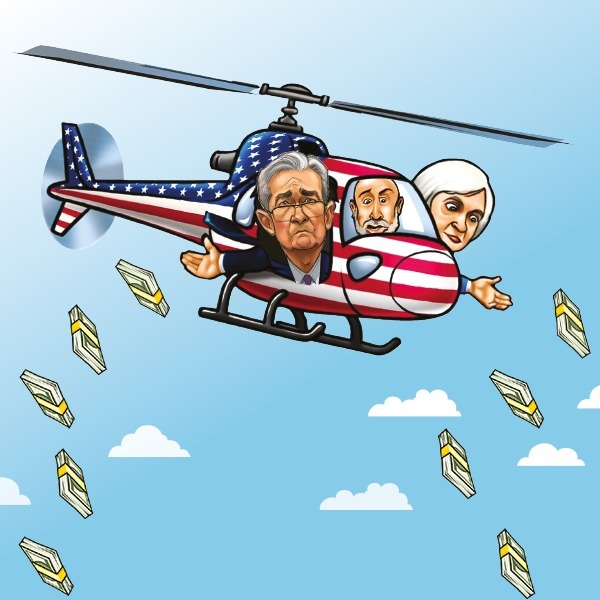 The “Everything Rally” continued during the fourth quarter of 2020 – well, almost everything as US Treasury Bonds were decidedly negative during the quarter. The S & P 500 was up over 11% for the quarter – finishing the year up 18%. Size and style played a major role as Small Cap Value was the top performing asset class for the quarter, up over 33%. The Russell 2000 clocked in its best quarter ever, returning 31% for the quarter and over 20% for the year. Cyclically sensitive stocks such as Basic Materials (+16%) and Energy (+32%) significantly outperformed the early Pandemic favorites such as Technology(+10%) and Consumer Staples (+6%). The US Bond market was flat at +0.6% for the quarter, masking the underperformance of US Treasury Bonds which were down 3-4%. Commodities in general were up nearly 14% during the quarter as inflation concerns, brought on the rapid growth of the global money supply, has begun to take root in investor psyches.

As you can see in the chart above, inflation expectations have returned to 2018 levels and currently (modestly) exceed the Federal Reserve’s target of 2.0% on average.

Early last year we wrote about investors treating the Pandemic and the resulting recession more like a natural disaster than the beginning of a prolonged downturn and we ended up with the shortest recession (end date still TBD) and quickest market recovery in history. While it did not feel like it at the time, last year’s volatility when looked at in comparison to the Financial Crisis of 2008-09 was not all that extreme and without knowing about the Pandemic, last year’s market performance would not stand out as all that unusual as illustrated by this table from our friends at First Trust1:

As we write this, President-elect Biden has rolled out his $1.9 Trillion stimulus package to further support the US economy. Below is an updated chart that we included in our last client letter, this time highlighting the last 20 years. As you can see, the US economy has already started to recover from the Pandemic related shut-down of last Spring (red line) and the proposed stimulus would further the growth rate of the US money supply (blue line):

Note, the recession probability measure (green line) has already collapsed back to near zero. The result should be more of what we wrote about in our third quarter letter – inflation, rotation, and a tailwind to risk assets of all kinds as illustrated by the correlation between the growth of the Federal Reserve’s balance sheet and the US equity market as measured by the S & P 500 over the last year.

The chart below includes a projection for the growth of central bank assets over the next couple of years for the world’s five largest central banks. 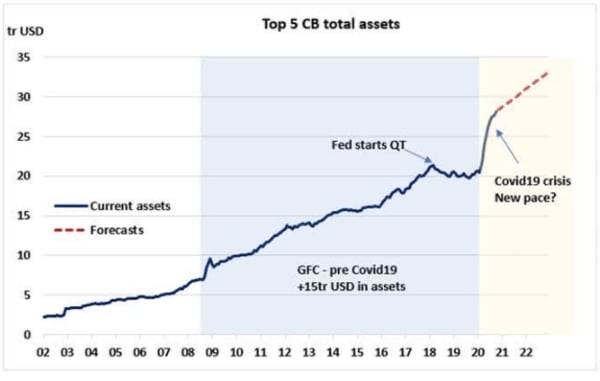 There already is a lot of gasoline in the global economic engine – let’s hope our government isn’t about to throw a lit match into the gas tank.

We at Measured Wealth hope you and your family remain healthy. Please call or email if you have any questions.


Disclaimer: Historical data is not a guarantee that any of the events described will occur or that any strategy will be successful. Past performance is not indicative of future results.

You may have heard the old investing mantra, "Don't fight the Fed." But what does it mean? Federal...